WMUA’s Liz Flood speaks with a Smith Professor whose art is on exhibition, Amherst had its annual maple lighting, the first Amherst Town Council is sword into office, protests erupt in Paris, and Neil DeGrasse Tyson is accused of sexual misconduct.

Maggie Kraine is a UMass student and musician whose debut album, The Reward (of) Missing, is on Spotify now. Last semester, WMUA News spoke with her about being a student musician and learned about some of her favorite songs.

It was a stunning Boston Marathon this past Monday. Not only did Americans dominate across the board, with American women claiming 7 of the top 10 spots, and American men taking 6 of the top 10; it also happened to be the five-year anniversary of the Boston bombing. Early in the day there was a moment of silence for the three victims who lost their lives in the bombings and for the one officer who was killed pursuing one of the bombers. 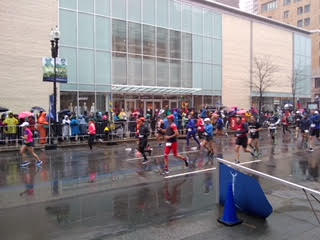 Hey, Becky the news editor here to tell you a little story about the yodeling Walmart kid, my dad, and the one thing they have in common: a love for 1940’s musical sensation Hank Williams.

It’s weird that my German-Brazilian immigrant father and a little Midwestern boy born in the late 2000’s are the two most pronounced fans of Hank Williams currently in my life and I’m gonna tell you why.

Thriving in the Golden Era of American Radio, and monopolizing jukeboxes across the South and West in the final days before the domination of rock ‘n roll, Williams was a heavy drinking, heavy yodeling, quintessentially American talent — as unreliable as he was undeniable. Considered one of the fathers of American singer-songwriters, Williams and his contemporaries were the first class of American musicians who could get famous writing and singing their own songs. There would be no Bob Dylan, no Elvis Presley, no Paul Simon without Hank Williams.

Now, the Walmart kid. 10-year-old Golconda, Illinois native, Mason Ramsey, became a viral hit after a video of him singing “Lovesick Blues,” a 1920’s show tune made famous by Hank Williams, was shared all over social media earlier this week. Importantly and inexplicably, the video takes place inside a Walmart.

In a different video (not inside a Walmart), Ramsey declares that his dream is to one day perform at the Grand Ole Opry (where Williams was a star) before launching into another Williams classic, “Hey Good Lookin'”. His accent screams, “I live very close to Kentucky,” and his vocals evoke memories of down home days gone by. In an online era dominated by terribleness, malicious terribleness, and horrifying terribleness, Ramsey is easy to love. Equal parts cute, remarkable, and hypnotizing, he’s the perfect viral meme child star. Like Gavin from Vine.

Now, my father. When I first heart Ramsey singing “Lovesick Blues” in the Walmart I didn’t recognize it as Hank Williams at first. It was the other video, “Hey Good Lookin’,” that instantly brought me back to memories of my dad: in the kitchen, in the family room, in the car – for the two decades that have been my life – singing that song.

How’s about cookin’ something up with me?

But come around I did, and now Williams is a favorite for my “I’m feeling homesick” or “I want to drive…West” listening. It’s still hard for me to explain though, to my fellow New England young people, why I like something that sounds so old and unrelatable. So, I enlisted my dad for some help.

Originally aired on WMUA Amherst April 4, 2018, here’s my dad, Rolf Wandel, telling us why he loves Hank Williams and why you should, too.

John Simpson is a professor at the Commonwealth Honors College and the creator and designer of Springfield’s “The Amazing World of Dr. Seuss Museum.”

Simpson, an artist living in Springfield, is well-acquainted with city personalities — from decision makers to fellow artists — trying to revitalize the city.

WMUA News’ Becky Wandel spoke with Simpson about “The Springfield Renaissance” and the thousands of jobs coming as the MGM Grand moves in.

Originally aired on WMUA Amherst on April 4, 2018, here’s some of their conversation.

It’s Master’s weekend at Augusta! It’s safe to say golf watching isn’t big among
college students, but my family loves it and I’ve been having trouble explaining why. So, I called my mom for help.

My mom, Jane Wandel, grew up with her entire mother’s side of the family living in Augusta, Georgia, which, next to Scotland (the birthplace of the sport itself), is considered the golf capital of the world.

Originally aired on WMUA Amherst on April 6, 2018, here’s my mom telling us a little bit about the magic of Augusta, from the perspective of someone who’s lived it.

Following their swearing in ceremony this past Monday, SGA President and Vice President Nathalie Amazan and Timmy Sullivan sat down with WMUA News’ Becky Wandel and Phillip Bishop to discuss their cabinet appointees, their plans for UMass in the coming year, and how they represent a different sort of leadership than what the SGA has become accustom to.

Can anyone really win a trade war? And if so, can it be us?

This week, President Donald Trump and his Chinese counterpart Xi Jinping continue to dole out tweets and tariffs in a game of transatlantic chess that could end up damaging the two biggest economies in the world.

Sophomore Asma Saeed is the Vice President of the Pakistani Students Organization (PSO) at UMass Amherst. The three-year-old Cultural RSO works to celebrate and educate campus about Pakistani culture.

Pakistan is famous for its elaborate and lively weddings, so this Friday, April 6, 2018, PSO will hold a Mock Shaadi, or mock wedding; all students are welcome to attend.

WMUA News’ Kortni Song and Rachel Swansburg spoke with Asma about PSO, its role on campus, and the Mock Shaadi.

More information on the Mock Shaadi can be found on PSO’s Facebook page.

Tonight’s broadcast takes listeners on a wild ride where they will discover where their tongue ends, a live update from baseball’s opening day, a Umass professor’s take on universal income, how Umass was chosen to participate in a national active shooter preparedness program, and Liz gives an update on the latest podcast. Take a listen!